Biographies of the Charter Members of the Alliance Against Workplace Violence

Patricia D. Biles, president of Biles And Associates, LLC, is the former National Workplace Violence Prevention Coordinator for the Federal Occupational Safety and Health Administration (OSHA). Throughout this 10-year position at OSHA, Biles developed guidelines and policy memoranda, while conducting more than 70 trainings and presentations throughout the United States. She served  as the key person in the National Office in Washington, D.C. for all activities related to OSHA’s involvement in the issue of workplace violence.

In addition, she was the sole representative and spokesperson for the U.S. Government at the 2003 International Labor Organization Meeting of Experts to finalize the International Code of Practice on Workplace Violence (Geneva, Switzerland).

Since retirement, Biles has actively worked as a volunteer within her community and her church. She is the founder of Angels of Lauderhill which provides health and wellness coaching to seniors and is a member of several ministries at the New Mount Olive Baptist Church.

As the Founder and Director of the Alliance Against Workplace Violence, Biles and the other members of the alliance are available to provide assistance to employers, community groups, and individuals in violence awareness, prevention and response.

John D. Byrnes, D. Hum is founder and CEO of the Center for Aggression Management® and a successful businessman, author and lecturer. He developed interest in the subject of aggression management after concluding that there were no comprehensive training programs dedicated to preventing aggression in the workplace.  His research revealed that conventional approaches to deal with conflict and violence were not working, hence the founding of the center in 1993.

The center provides organizations with the much-needed Aggression Management® Skills. These human-based skills have demonstrated to employers that they can prevent aggression rather than merely react to it. Used by a cross-section of employers, these skills have proven effective in diminishing aggression and increasing productivity.  Following 9-11, Byrnes developed the Aggression Management® Identification System, an effective method of identifying a terrorist.

Byrnes was selected by the US Department of Labor to represent the United States at the Violence as a Workplace Risk Conference held in Montreal, Canada.  This conference is a joint effort by the United States, Canada and Mexico through the North American Agreement on Labor Cooperation (NAALC), the NAFTA labor side agreement.  Byrnes is proud to be part of the National Center for Higher Education Risk Management’s (NCHERM) team working toward a legally defendable method of making university and college campuses safer.

Nancy Carothers is a former journalist and the co-director of the National Convenience Store Safety Committee.  Since her father’s murder in a convenience store in 1977, she has worked with crime victims, activists, unions, criminologists, government agencies, and law enforcement professionals nationwide to promote measures to prevent violent crimes in late night retail establishments.  Her efforts have included working alongside the AFL/CIO to advocate the Occupational Safety and Health Administration (OSHA) safety recommendations for late night retail workers issued in 1998. Since that time she has provided major assistance in the adoption of worker safety regulations for the State of New Mexico, which the National Convenience Store Safety Committee is now advocating for all states.

Eric Frazer, Psy.D. is a licensed clinical psychologist with a specialization in Forensic Psychology. Assessment and psychological testing for private consultation as well as court-related matters play a significant role in his practice.

In the community, Dr. Frazer is involved in school safety consultation and regularly provides assistance in response to matters of crisis, potential threat, and students of concern. Although clinical in nature, the school threat assessments are also useful for managing legal concerns by all parties. Workshops and in-services are regularly offered for school systems, special education organizations, and school behavioral health professionals addressing bullying, sexting, and other aspects of mitigating school violence.

Dr. Frazer holds an adjunct academic appointment of Assistant Clinical Professor at Yale University School of Medicine and is involved in the psychology fellow training program. Dr. Frazer volunteers as a court-appointed special advocate and serves as a Guardian Ad Litem for children in probate court.

Outside the office, Dr. Frazer practices risk-management and threat assessment in his hobbies including ice-climbing and mountaineering.
Web site: www.drericfrazer.com

Johnny Lee is the executive director of Peace@Work, a non-profit dedicated to the prevention of violence and crisis response in the workplace.

He also served as the training director for PREVENT, a CDC-funded violence prevention program under the direction of UNC Chapel Hill’s Injury Prevention Research Center. Lee was previously the workplace violence specialist for the Office of State Personnel in Raleigh, N.C., with responsibilities including consulting all 16 campuses of the University of North Carolina system and the Department of Community Colleges on the development and revision of its workplace violence programs.

Lee’s involvement with professional organizations includes his role as chair of the NC InterAgency Council of Victim Services and he served on the board of directors for the Businesses Continuity Planners of the Carolinas. He was the chair of the Workplace Policies Committee of the NC Domestic Violence Commission and is an active member of the American Society of Safety Engineers.

Author of the human resources book, Addressing Domestic Violence in the Workplace (HRD Press, 2004), Lee has also co-authored Armed Robbery Preparation Manual, a training resource for front line clerks and bank tellers on surviving a robbery and supporting the investigations.  He also has published articles in The Journal of Safe Management of Disruptive and Assaultive Behavior.

During his tenure as victim services coordinator for the Asheville Police Department, Lee headed a unit of staff and volunteer advocates delivering assistance to victims from the crime scene through to sentencing and beyond.  While there, he served on the Family Violence Task Force, a network of community resources to develop awareness and coordination of services.

Lee has developed programs and workshops for organizations including:

Prior to founding the institute, Nixon studied general management in the University of Hawaii’s Executive Management Program. He earned a master’s degree in human resource development from the New School University, and a Bachelor’s degree in business management from Northeastern University.

Nixon has also completed the Advanced Human Resource Management program of Babson College as well as the certification programs in organization development from National Training Laboratories; Systems Thinking from MIT, and the Creating Competitive Advantage through Human Resources program from the University of Michigan’s School of Industrial Relations. He is a certified Senior Professional in Human Resources; a trained mediator; certified anger management facilitator; security specialist; trauma response specialist, and earned a certificate in background investigations from the Public Safety Institute, Santa Rosa College.

A member of ASIS International’s Crisis Management Council, Nixon has served on its Workplace Violence Prevention Guidelines Committee and is currently representing the Society for Human Resources Management (SHRM) on a joint commission with ASIS to create the first Standard for Workplace Violence Prevention. He is also a member of the Security Executive Council Advising Editors for Security Magazine, and the past national president of the American Association for Anger Management Providers.

Nixon currently serves as co-chair, International Committee, National Association of Professional Background Screeners (NAPBS) where his role is to lead its efforts in establishing an international network of professional background screening firms. He was appointed in January 2010 by SHRM to serve on its Employee Health, Safety & Security Special Expertise Panel to provide specialized counsel to the SHRM Board and membership.

Nixon is a frequently requested speaker both in the US and internationally on the subject of workplace violence and background screening. He recently presented at the World Human Resources Congress held in Singapore and the Annual India’s Pre-employment Conference in Bangalore. He is the creator of the award-winning Web site www.Workplaceviolence911.com and the leading directory of background screening firms, www.PreemploymentDirectory.com.

Author of the Ask the Expert column in The Workplace Violence Reporter, Nixon was named in the Top 25 Most Influential People in Security by Security Magazine in December 2009.

His fourth book, Background Screening and Investigations: Managing Risk in the Hiring Process from the HR and Security Perspective, is currently available.

Edward Stern has served the US Department of Labor for 40 years as a senior economist and policy/program analyst. He joined OSHA in 1985 to examine health and safety risks and regulatory feasibility. For 12 of those years he supervised research and modeling of the impacts of proposed regulations; initiated and coordinated the development of expert systems to reduce regulatory burden on small business.

He has guided teams of scientists, engineers, doctors, nurses, systems analysts, and attorneys from OSHA, the Department of Labor, trade associations, and labor organizations to develop interactive “Expert Advisors” to deliver decision-making expertise to the public.  Stern also served as the part-time spokesperson on this strategy for former-Vice President Al Gore’s National Partnership for Reinventing Government. This approach has since been adopted by several federal and state agencies.  He was also appointed by the Administrator of EPA as a private citizen member of the EPA Compliance Assistance Advisory Committee (2002 – 2004).

Stern’s OSHA expert advisors were honored by the Ford Foundation and the John F. Kennedy School of Government as a finalist in the Innovations in American Government Award competition, and recognized as a model for e-Gov by the General Accountability Office, Deloitte Research, IBM Center for the Business of Government, and others.

Stern has been a labor activist in Local 12 AFGE in the roles of steward, mediation rep, a mid-term bargaining rep, and delegate to the Metro Washington Council of the AFL-CIO.  He researches, writes, and speaks on workplace bullying, and has presented his study on bullying at the Labor and Employment Relations Association annual conference in 2007.  Stern is an accepted expert witness on bullying in arbitration cases.

Check Out Our Latest Book 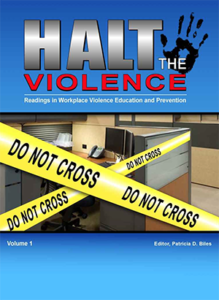 For a limited time only, feel free to download free audio resources for workplace violence prevention…